Misterley Manor, the setting for “The Manor on the Moors” was partly inspired by Grey Towers, a mansion to the south of Middlesbrough. My imaginary house is larger and built fifty years later, and it sits on the edge of the moors, rather than the edge a town, but it shares a heritage with Grey Towers, both historically and in the landscape of my imagination.

Grey Towers seen through the branches of the old orchard.

In the late nineteenth and early twentieth century Middlesbrough was an expanding town with a bright future. “The Infant Hercules” of iron and steel production run by ironmasters with solid, resonant names. Bolckow and Vaughan. The Bells. Dorman and Long. Swann. And these ironmasters had the wealth to build themselves impressive new homes around Middlesbrough, just as Sir Edward Lattimore does in  “The Manor on the Moors”. 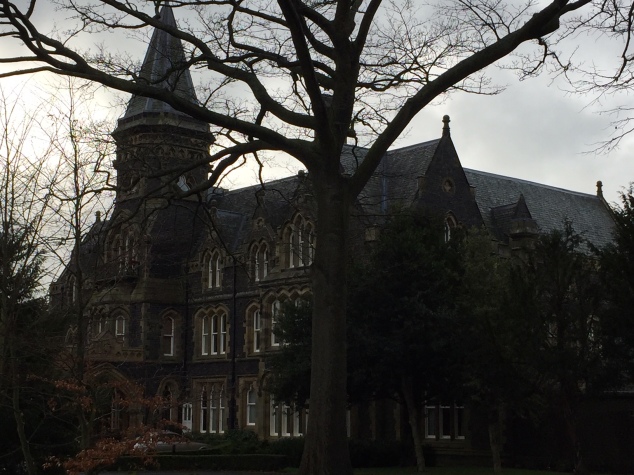 One of these ironmasters’ houses was Grey Towers in Nunthorpe, built originally in 1865 by William Hopkins who owned the “Teesside Ironworks” company. Sadly this company was responsible for the iron which built the Tay Bridge and following its disastrous collapse Hopkins went bankrupt. Grey Towers was eventually sold to Sir Arthur Dorman. His company, Dorman-Long, built the iconic Sydney Harbour and Tyne Bridges – neither of which have collapsed so far – and Dorman lavished further attention and money on Grey Towers. It was an almost theatrical house, framed by its spectacular gardens and with a backdrop of the picturesque Cleveland Hills.

Sir Arthur Dorman died in 1931 and the house was sold to Alderman Poole, who donated it to the people of Middlesbrough to be used as a hospital, and latterly as accommodation for the hospital staff. Poole Hospital finally closed in 1988 and the house had been unused for a while before that.

Grey Towers has been part of my imaginative landscape for as long as I can remember having an imaginative landscape! It fascinated me as a child and I first remember it as part of the  hospital. The closest I ever got to going inside the house was standing outside to sing carols for the hospital patients in the winter. Glimpses through the windows seemed to show nasty 1960s wallpaper and institutional doors and furniture. Raised on a diet of historical novels (most of them involving time travel or ghosts) I was disappointed by the glimpses of the mundane interior, and preferred to imagine my own. But, it turns out that there were still original features hidden there; ceilings and fireplaces, and underneath all the later decorations even the original high Victorian peacock wallpaper, panelled over by Sir Arthur Dorman in the 1870s and now in the Dorman Museum.

Grey Towers, the garden side.

As the house remained locked up and the decay of a decade began, it was just possible to peep through the boarded up windows of what I imagined had been the ballroom. Some of the lads in my class at school claimed to have gone in and explored; the floor being wooden had started to rot in places and it looked like the end of the road for Grey Towers. Ghost stories began to circulate, the old hospital buildings next to the house were like something from a horror film (see https://www.gazettelive.co.uk/news/nostalgia/haunted-poole-hospital-grey-towers-9213485) and it was around this time I first heard rumours of a “grey lady” said to haunt the house and gardens.

If anything, Grey Towers became more romantic precisely because it was abandoned and because I had never seen more than the odd covert glance inside. My imagination filled it with antique furniture draped in cobwebs, like a scene from “Great Expectations”. 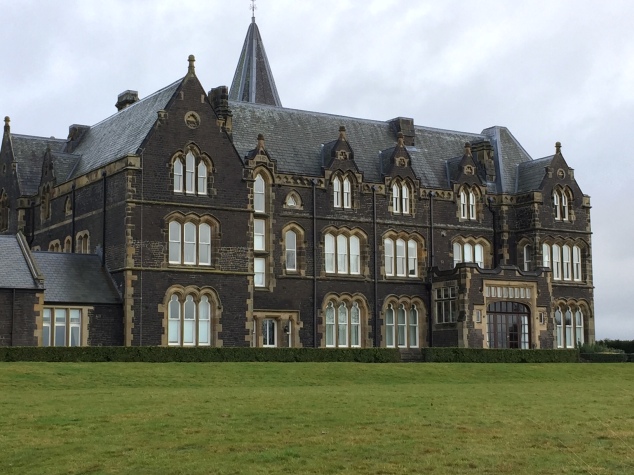 The garden side, looking over what in my imagination must have been the croquet lawn.

However in the 1990s the house was sold and then it was turned into apartments. Very exclusive apartments. I’ve still never been lucky enough to see inside the house. I had the opportunity – the developers opened the house for local people to look round, but I was in the early stages of pregnancy and too nauseous to get there, so I’ve still never been inside, which means that my imagination can still furnish the inside of the house however it wants to.

To see more images of Grey Towers, see the website of artist Ingrid Sylvestre who has painted Grey Towers many times. http://ingridsylvestregreytowersart.blogspot.com

3 thoughts on “The inspiration behind Misterley Manor- Grey Towers.”